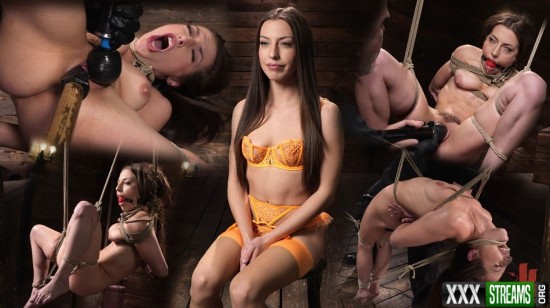 Spencer Bradley has been very curious about bondage, but too afraid to try. She found it sexy but intimidating. The Pope gets her rigged into a basic standing position. A position common to gauge what a new submissive is capable of. He begins with a chest harness box-tie, and before she knew it, Spencer was in a three-point suspension getting her pussy destroyed one orgasm at a time. He saw she was capable of handling more than she thought she could. It turns out that Spencer is quite the rope bunny. The Pope asks Spencer how far she wants to go, and she replies, “As far as you’ll take me”. The second scene begins with Spencer in a partial suspension with one leg pulled up while her upper body rests on the floor. Her other leg is tied to the floor to keep her legs extremely wide, and her pussy available. The Pope uses his crop to torment her pussy and other parts before fucking her face and pussy with a dildo. She is so grateful for the experience that her pussy explodes into squirting orgasms. The Pope unties her lower leg, and hoists Spencer into the air by one ankle into a hanged-man suspension; one of the most brutal suspensions one can endure. Surprisingly there is more, and this time Spencer finds herself in an extreme predicament position. She is bent backward, off balance, her head tied to her ankles, and rope pulling in every direction. This is the epitome of being fucked, and Spencer takes it in stride. The Pope administers multiple orgasms to get her through the suffering. In a powerful finishing move, he takes her feet away and pulls her into yet another grueling suspension. If you were ever curious about how tough Spencer Bradley is, look no further than this update, proving again that Hogtied is the best place for the most extreme bondage on the internet 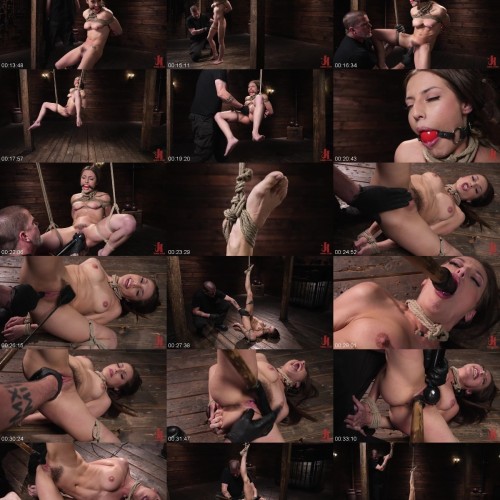